Last year when T2 was learning her letters and letter sounds, I made this from a shower curtain. I drew the circles using a plate as a template, drew the letters and coloured them with permanent markers. Either she would throw the bean bag and then name the letter/letter sound it landed on or I would ask her to aim for a certain letter. We also used it for jumping on certain letters. It's still fun now, even though she knows the letters, now she gets to work on her aim!! 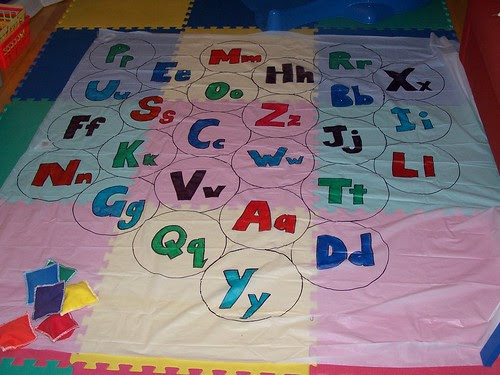 I second your opinion on this matter. Personally I have a child that suffers from ADD, and this aspect of child development has left me puzzled on the options that I can take up. Sometimes I am just at my wit's end.

I love this. Thank you for sharing. I'll be linking up over at http://www.onthelap.org so stop by and visit us tomorrow for your feature. Thank yoU!

I am a 40 year old Wife to G, Mom to T1 (boy 12.5 yrs) and T2 (girl 7yrs). I'm a homeschooling Mom with 20+ years of early childhood education background. I'm learning with my kids everyday and trying to find fun ways of doing it while juggling a house, 2 dogs, a child with Asperger's and another with Dyslexia and a peanut/tree nut allergy. I'm a newish vegan and pizza is not the same without cheese!

Please credit/link me if you blog using my ideas : )